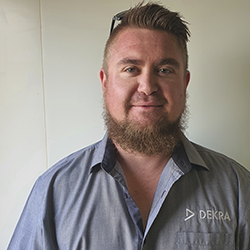 Another of the original Raysonics team, his journey with DEKRA Industrial began in November 2007 as a trainee with the company, where he is still today.

He is a qualified Surface Level 2 technician combined with RT Level 2 and UT LI. Hercules is also trained as a Radiation Protective Officer (RPO) since 2012.

In 2013 he was appointed Team Leader, responsible for Met Surveys on various power stations and in 2014, was moved to Kusile Power station, where he was appointed as the Assistant Manager and was allocated to Endel Enge, for the completion of the Turbine 3 project.

In 2015 December DEKRA worked on MRPE Kusile to relieve a large backlog, where Hercules was assigned for three years, and in 2019 was appointed as the Site Manager on Kusile.

Hercules would like to attain his degree in the NDT field and is presently also very involved on the safety side, currently working on obtaining a qualification in this sector.