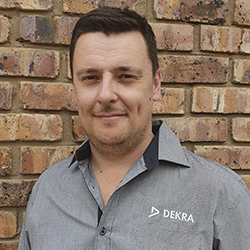 Has been with the company since November 2007.

Another of the original Raysonics team, Eddie started his career as an NDT Assistant on Matla power station, the day after writing his last Matric paper.

This early introduction to NDT whetted his appetite for the sector, especially after the first time he was introduced into the world of industrial radiography. He continued to qualify in the many methods of NDT while working on various projects and sites across South Africa including the petrochemical, power generation, fabrication, foundries and rail sectors.

In 2010 with the start of the Medupi project he moved to Ellisras, where he continued to work on the Medupi project until august of 2010 when he had to relocate back to Middelburg for personal reasons. Being based in Middelburg and close to the Kusile power station, Eddie noticed a need for an NDT company to service clients on a call out basis. By end of 2013 he had a fully established site on the Kusile project and by 2018, what had started off as a one-man show had developed into a fully-fledged site consisting of 144 employees.

During this time, Eddie started to pursue his Level 3 qualifications in NDT as well as to become an ISO 9001:2015 Lead Auditor and, come the end of 2018, he was appointed by DEKRA for the role of Quality Manager and company RPO.

In October 2020 he was appointed as the General Manager for DEKRA Industrial RSA, while maintaining his role of being in charge of the quality management system and the upkeep of all quality related functions within DEKRA Industrial.

Eddie’s goal is to uphold and enhance DEKRA’s reputation as the top brand for NDT inspection within the pan-Africa area, and to be recognised as being a group of analysis techniques that evaluates the integrity of certain components within multiple sectors, while maintaining an exceptional level of quality and performing inspections in the safest possible manner.

His other goal would be to make the NDT Technicians performing inspections not only best equipped for what they do, but also to ensure that they realise the importance of their inspection, and the value that this adds to DEKRA’s clients, in the sense that once they are certified by means of a NDT Report, the client is sure the part is sound and safe.