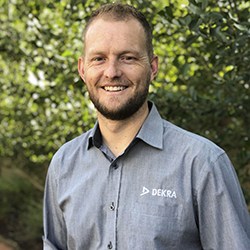 Responsible for all DEKRA Industrial’s IT challenges and, as IT Manager, he began his time with the company in March 2015.

But he is not only a ‘backroom guy’ as, after studying a B.Sc IT at NWU University until 2006, he tried his hand at being a tennis coach for about a year and then decided to see what office life was really all about.

After working at a Payroll / Time/Attendance company in Johannesburg as a Time and Attendance Consultant, he left in 2012 and worked as a Data Analyst for a promotion company in Pretoria.

Thereafter, from 2014 he worked part time for an IT company in Johannesburg, until starting with DEKRA.

A man of many hats, presently, Janno has no clear goal as to where, or in what field he’d like next to work, as he is perfectly happy working at DEKRA Industrial and solving all things IT.