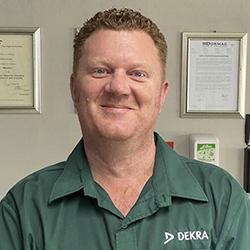 First joining the company in February 2016.

His association with DEKRA goes back to 2002, when he started his apprenticeship at Raysonics and completed RT L1, MT L2, PT L 2. By 2008 Rudolf was a Senior Technician at Falcon Inspection Services and was promoted to Supervisor in 2009, completing his RT L 2 and RPO while there.

By 2013, he was Branch manager of SGS and completed Supervisors training, legal liability and other safety-related courses and, in 2015, Stanley Inspections offered him a position as a Branch Manager for their Cape Town Branch, where he moved from the Vaal.

In 2016 DEKRA approached Rudolf to start a branch for them in Cape Town and he has been with the company ever since. Rudolf’s goal is to keep on growing the branch and maintaining a stable work environment for everyone.